A Trip to Remember


Not to long ago my wife and I went on trips.  She took her mom back to Japan while I went up to visit my parents in Washington State.  My trip went much smother than her's but there was much drama because of her trip.

As I said in a previous post, I am spending a lot of time trying to get my mother in law back up to good walking condition.  We use a chair to assist her in moving around for longer distances, but that is only good in places where there is a long distance to navigate, and they let you take the chair.  This led to the first and most time consuming part of her stressful trip.  While on the plane, my mother in law fell down and broke a couple bones.  Fortunately there was an ex Emergency Medical Technician on board and was able to help her.  Also this got her a free upgrade to business class from some generous passengers, free as in at the expense of her arm. 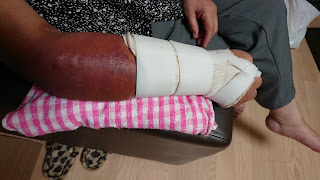 Along the trip, the super typhoon Jebi was present almost the entire way.  So this resulted in very little calm flight and much rain.  She had to work with the lawyer about meeting times because her mom was in the hospital.  While she was there in Tokyo, the next part of the trip was put in jeopardy because of the largest recorded earthquake in Hokkaido.  A day and a half before her flight to Sapporo, New Chitose airport was reopened.  Up till then the two of us had been talking about how to go about rescheduling and if the airline would recognize a natural disaster as a reason to need a reschedule, especially if it is on a flight not attached to the first ticket.  Fortunately we did not have to find out.

All this while my in laws were in Sapporo without utilities or water for three days.  Fortunately they had a supply of bottled water.  On a previous trip I had gotten frustrated at the lack of a working flashlight.  This light was the only working light they had for the three days without power and water.  Also found out about a cool lantern trick after the fact.  Place a water bottle on top of a flashlight to get it to act like a lantern.  My wife made it to Sapporo, and my mother in law also made it.  Luckily there in Sapporo not much stuff got knocked down so there wasn't any cleaning up for them.

Monday my wife made the trip back and I picked her up in Portland.  Something I had not been paying attention to, but it was still happening in the background was that the Shasta area of northern California was burning.  We missed that by half a day.  The I-5 was reopened the morning before we went through the area, and the only restriction was no trucks with flammable loads were allowed.  While passing through we got several great pictures of the burned out forest.  All the while our dog patiently waited out the trip sleeping in thee back seat.
at September 16, 2018